We have been carrying out studies, reports and research in the environmental field since 1994. We have dealt intensively with the consequences of Chernobyl in the environment in several research projects. Another focus of work of Environmental Analysis (umweltanalysen.com) is satellite telemetry of wild animals with GPS collar transmitters.

Global warming and the current discussions about climate protection and the energy turnaround illustrate the complexity of atmospheric, ecological and economic relationships. Environmental analyzes and modeling are the basis for understanding climate processes and possible solutions to limit the increase in pollutants and temperatures.

Federal overview of the radiocesium contamination of wild boars Project 3607S04561
Departmental research reports on nuclear safety and radiation protection
on behalf of the Federal Ministry for the Environment, Nature Conservation and Nuclear Safety

Modeling of the radiocaesium contamination (caesium-137) of wild boars with a radioecological computational model in a Geographical Information System, taking into account the relevant, contamination-determining influencing factors for the whole of Germany.
Data sets from the CORINE land use served as a basis. The work is based on the hypothesis that caesium-137 is absorbed via food.
In order to keep the food spectrum appropriately simple in the model and still account for site-specific differences in the cesium-137 contamiationm of different biomedia, seven food categories were formed that contribute to the Cs-137 input of wild boars:

1. deer truffles (Elaphomyces granulatus, Elaphomyces muricatus).
2. plants and other fungi of forests
3. soil of forests
4. plants and fruits of arable land
5. soil of arable land
6. plants of meadows or permanent grassland
7. soil of meadows or permanent grassland
Food spectra are weighted by the number of 1km x 1km grid cells (according to CORINE land use) in the 3km x 3km plot elements.
Modeling root uptake of Cs-137) across different soil layers:

Older research project: Investigations on the behavior of radiocesium in wild boars and other forest biomedia in 2005

In this research project the reasons for the relatively high Cs 137 activity of wild game, especially wild boars, were clarified in detail. The monitored area is located in the Bavarian Forest, a region particularly affected by the Chernobyl fallout. An important goal of the research project was to develop a dynamic radioecological model suitable to describe the time course of contamination of deer, red deer and wild boar in the past and to predict future contamination. The composition of the food eaten by wild boar and deer was determined by analyzing the stomach content of the animal. Samples of the relevant food components were collected in the monitored area and their Cs  137 activities were measured.

1994 – 2008
GPS Tracking Wildlife. Umweltanalysen.com has conducted several research projects on the space-time behavior of red deer and mouflon in Germany. We were also cooperation partners in international studies on bears, moose, reindeer and wolves.

The bear was fitted with a GPS transmitter as part of the Scandinavian Brown Bear Research Project. 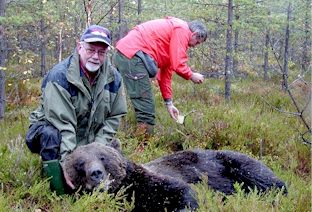 Some movement patterns of the bear are shown in the following figure. 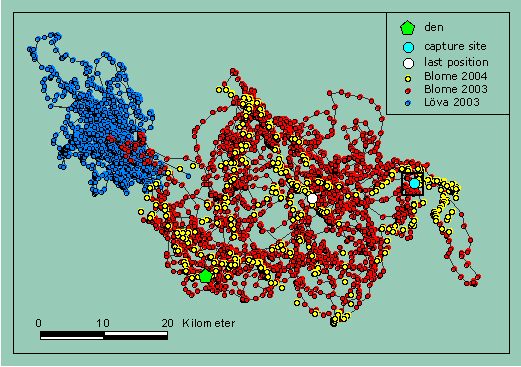 In the 21st century, a global threat to our environment exists for the first time: global warming.

Our environment has changed rapidly in the last decades. Environmental problems existed before, of course. In the 1980s, for example, there was a danger that our forests would disappear for the foreseeable future due to acid rain. But there were also considerable environmental problems in the centuries before from the point of view of the time, for example due to tanneries, charcoal burners, and so on. The damage to people and nature was mostly local or regional.

On umweltanalysen.com we would like to provide up-to-date information on trends in the environmental field. This currently includes the trend back to country life. More contemplative living, linking new technologies with old ways of life.

The predicted climate change, which is already clearly noticeable in the northern hemisphere, is probably triggered to a large extent by us humans. Energy is a key word here, actually energy consumption. Energy efficiency will be a guiding theme for the decade ahead. Ecology and economy will come together in the development of new, energy-saving devices. Energy consumption and thus emissions must be reduced.

The energy consumed in Germany is mainly produced by coal-fired power plants, nuclear power plants and, to an increasing extent, by renewable energy sources. Solar energy, wind power and energy from hydropower are making an increasingly large contribution to our energy supply. At the same time, they help to keep CO2 emissions low.

The quantification and assessment of national and global substance inputs are becoming increasingly complex. In addition to the levels of conventional pollutants, which have been documented for decades, environmental analysis of CO2 and atmospheric trace gases has become increasingly important in recent years. The modeling of the processes is complex and the simulation results of the prediction models are sometimes associated with large uncertainties.

The analysis of complex mass transfer processes, for example of radionuclides in forest soils, is a major field of work of Umweltanalysen.com.

What is environmental analysis?

Environmental Analysis is a strategic tool used to analyze factors influencing the environment. By environment is meant not only natural ecosystems such as deserts, forests, etc., but also companies and societies. The analysis identifies all external and internal elements and process flows that can affect the performance of the environment. The analysis involves assessing the level of threat or opportunity that the factors could pose. These assessments are later translated into the decision-making process. Environmental analysis helps align strategies with the business environment.

Globally, there is a new 30-bis-30 movement that aims to put 30% of the planet under protection. The EU has also included this target in its biodiversity strategy. The EU wants to designate 30% of Europe’s land areas and 30% of Europe’s marine areas as protected zones.

More than 100 scientists have conducted the first-ever cost-benefit analysis of the economic impact of the proposed CBD target to protect 30% of the planet for nature. Ffunded by National Geographic and the Campaign for Nature, the project is based on the Cambridge Conservation Initiative.
The report models different scenarios for protecting at least 30% of the world’s land and ocean. Result: the economic benefits of protecting planets outweigh the costs at least 5 to 1.

It is the first systematic examination of how protected affects land, fisheries, forestry, fisheries, and agriculture. The report evaluates benefits that cannot be directly measured in monetary terms, such as ecosystem services, including climate change mitigation, flood protection, clean water provision, and soil conservation. Also analyzed are the financial impacts of protected areas on the global economy.
For all measures, the experts find that benefits are greater if more nature is protected than if the status quo is maintained.

The models assume that the implementation of the 30% target would also lead to higher production values (revenues) in agriculture (all crops and ruminant meat) and forestry. This effect is often observed when land use is constrained, as the scarcity of available land (or sea) increases the prices that producers receive for their goods and also leads to productivity improvements. The authors note that higher farm prices can be a benefit to rural producers but a detriment to consumers. However, consumers are likely to live predominantly in more affluent cities by 2030/2050 and GDP >per capita will roughly double.