Following the initial authorized release of 17 lynx into what is today the Sumava National Park, the lynx has been successfully repopulating its traditional habitat along the frontier crest since the early nineties. This forest cat, who is active throughout a wide, cross-border area, has become the symbol of the largest forest complex in Central Europe and is used to advertise this attractive holiday region. Following the initial euphoria over increasing numbers in the mid-nineties, the lynx population has been slowing down in recent years. In this pilot project the movements of a male lynx has been determindes by telemetry via GPS GSM collars in 2005 (fig. 1).

Together, the Bavarian and Bohemian Forest National Parks are currently the main habitat of the lynx. This is where the forest cat is primarily active and also where it feels safe enough to breed regularly. As part of a joint partnership, the two National Park administrations consider it one of their primary duties in the area of conservation and research to sustain the population of this highly symbolic species.

Improved coordination of terrestrial monitoring during the winter half year (checking tracks following fresh snowfall) and prompt mutual exchange of monitoring results should provide a useful basis for estimating the population, as well as determining reproduction rates and the size of the current area of activity.

A primary focus over the coming years will be to investigate across borders how the lynx uses its habitat in the current centre of activity in East Bavaria and to determine the role of the species in the mountain forest ecosystem (deer-lynx predator-prey relationship) on both sides of the border. The aim here is also to break new ground in lynx research based on the results of satellite-supported deer telemetry. After a sufficiently effective and light GPS transmitter collar had been developed, it was possible to test satellite-supported telemetry with an adult lynx male for the first time at the beginning of March 2005.
Data relating to the whereabouts of the animal detected by GPS satellite can be retrieved any time at any interval by text message, and then analyzed and used for specific purposes, to implement necessary management and protection measures for example (fig. 2). Until now, an average of 34% of all localization attempts have been successful.

Initially, to test the GPS-GSM technology (illustration 1) on the lynx, two adult males will be fitted with transmitters. When the pilot phase has been successfully completed, the plan is to fit several lynxes with transmitters on both sides of the border as part of a cross-border project. Using the deer that have been fitted with the same technology, the project also aims to investigate the interaction between the deer and lynx in an extensive, naturally-developing mountain forest ecosystem. 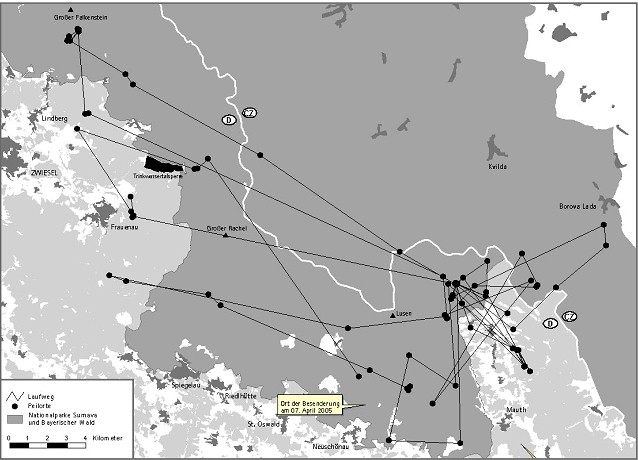 Of particular note are the star-shaped movements of the animal through the prowling area. Milan has a relatively small core habitat (2106 hectares 50% core range) from which he makes trips of up to 20 kilometres on any given night to hunt deer. Once he has finished with the kill, he returns to this core area (illustration 3).

The new transmitters make it possible to locate the animal’s kills with precision using a GPS receiver. The advantages that have emerged over traditional telemetry so far include:

1. The main objective is to use the latest, animal-friendly communications technology to collect accurate, real-time data free from interference on the movements of the lynx, as well as on the predator-prey relationship between the deer and the lynx in an extensive, naturally-developing mountain forest ecosystem. The results should provide additional sound insights into how the returned predator influences his most important prey, which in turn should help objectify the discussion with hunters further.

2. Fitting both deer (10 in each national park) and lynxes (3 in each national park) with transmitters will also make it possible to analyze how the behaviour of the deer changes according to the whereabouts of the lynx. In addition, the greater information density achieved with  GPS means that it is possible to calculate the presence of the lynx in certain parts of the prowling area with varying degrees of probability. In these areas, data on the browsing damage caused by deer to forest regeneration could be collected and incorporated into the study. With all this information there’s a higher chance to be able to analyze the complex lynx – deer – forest regeneration system during the next main project.

3. We also expect insights into how adult animals use their prowling area. Fitting neighbouring lynx males with transmitters will allow the theory of exclusive territoriality, which remains disputed among experts, to be investigated. Due to the fact that many of the animals’ movements cannot be recorded using conventional methods (see the National Park administration’s deer project), we expect GPS telemetry to help us answers this question.

4. Precise GPS data will allow us to parameterize the results of terrestrial tracking activities in the National Park over the last ten years with the aim of improving future lynx monitoring.

5. Finally, recording real-time data on the movements of the lynx on an ongoing basis and as precisely as possible will no doubt improve protective measures against illegal shooting, at least for those animals fitted with a transmitter.