The tracking investigations on the habitat use of wolves in Finland are a cooperative pilot project between Ilpo Kojola (former Finnish Game and Fisheries Research Institute, Tavailkoski, Finland) and Umweltanalysen in 2002. It is the first time that a wolf is telemetrized with a GPS collar and the data is transmitted via GSM. The investigation area is located in the eastern region of Finland (Fig. 1). Since wolves are hunted there illegally as well as legally, this area will not be localized in further detail.

Fig. 1: Location of the investigation area in Finland (red symbol)

Way of life of the finnish wolves

About 110 to 120 wolves live in Finland in 2002. At that time annually 12 of these animals may legally be hunted. The wolves live in small packs with a distinct social hierarchy. The pack size varies between 5 – 12 animals depending upon the season and the “founding history” of the pack. Every night, they cover an average distance of 15 to 20 km, in summer up to 40 km. Normally they cover distances in a “wolf trot”, an energy saving gait, but they can accelerate to 50 km/h over short stretches, for example, when they are hunting. Their prey consists of 70% moose, 25% wild reindeer, and 5% hares, rodents, and birds.
(Wolf population in Finland 2002: According to LUKE: With a probability of 90%, the number of individual wolves in Finland in March 2020 was 216–246.)

Due to their high mobility, their spatial and temporal behaviour is difficult to investigate. Here satellite telemetry provides the optimal solution. In our team project we use the newest applied technology, GPS GSM collars developed by Vectronic Aerospace, Berlin. The wolves wear 750 g collar which determines and saves his respective locations via GPS (Global Positioning System). The form of data transmission is new: the locations of the animals are transmitted once daily directly from the GPS GSM collar via the mobile phone system (GSM system=Global System for Mobile Communication) integrated into the collar similar to an SMS sent by mobile phone (via SIM card). The data are sent to the researcher’s office where they can be transferred by computer to a digital map. 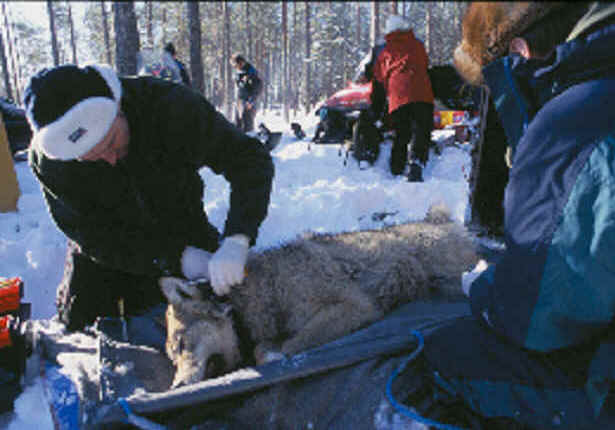 Fig. 2: A male wolf under anaestetic is outfitted with a GPS-Plus GSM collar

The GPS-GSM collar of the young wolf is programmed in such a way that it determines his location every 4 hours and sends the data as an SMS once daily. Until now the behaviour of wolves in Finland was investigated using “normal radio telemetry”, which is very time consuming. With the new system the movements of wild animals – with a choice of the number of positions registered per day – can be monitored over several years. This all can be done from the office in a time saving, evnvironmentally sound, and inexpensive manner.

The transmitted positions are arranged in chronological order and shown in Fig. 3.

At the end of May the wolf left the area where he had stayed since March and moved 180 km further up north. He is still in this area. Now he travels together with a female wolf, which is equipped with a VHF-collar. This area is marked with a rectangle in Fig. 3 and enlarged in the following picture (Fig 4.).

Where many positons are densely clustered the wolf probably downed prey and spent some time in the vicinity. Fig. 5 shows a young reindeer killed by wolves. In this environment the wolves often hunt domesticated reindeer. 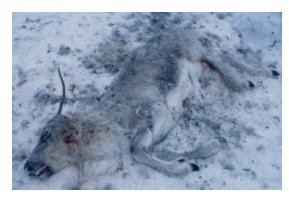 The reindeer herders get compensation from the government. GPS-GSM telemetry is helpful to find wolf kills.
Regardless of all agreements between the different groups of interest, the collared wolf was shot at 19 October 2002.

Fig. 6 shows a histogram of the time, the GPS-receiver needed to find and record the location of the wolf from March to October 2002.  1106 positions have been evaluated. 65% of the locations have been determined in less than 60 seconds (mean: 74 seconds).

Fig. 6: Histogram of the time the GPS-receiver needed to take a position (n=1106)

The activity of the wolf has been monitored by a two axis activity logger. By this, the acceleration of the collar will be estimated 6-8 times every second and the overall mean value has been stored every 5 minutes. Figure 7 shows the activity and temperature data of the wolf within the tracking periode. At least  39539 data sets have been stored on the collar.

Fig. 7: Activity data in x- and y direction (blue and green symbols) and temperature (red line) data taken by sensors in the GPS-GSM collar from March to October 2002 (n=39539 data sets each)

The wolf tracking project was a Cooperation with Ilpo Kojola at the former Finnish Game and Fisheries Research Institute, Tavailkoski, Finland and Umweltanalysen.