Until the beginning of this study in 1994 the movements of wild mammals in Germany were exclusively investigated terrestrially using radio telemetry or in exceptional cases from a plane.
Worldwide, however, the spatial orientation, choice of habitat, and behaviour of many animal species was already being investigated with the Argos Satellite System.  The Argos System is particularly suited to locating far ranging animal species, since the localization need not be more accurate than 100 m.  In Germany  satellite telemetry had only been used for bird species at that time, for example, BERTHOLD et al. (1992) and KAATZ (1995) investigated the flight behaviour of storks using the Argos System.

Telemetry with the Global Positioning System (GPS) is an efficient and often cost effective method to monitor the movements of animals as well as being the most accurate in determining spatial and temporal locations.  Since the investigation areas only have to be entered once to outfit the animals with a GPS collar, this method also promotes environmental protection.  In addtion the instruments can be re-used several times.  The investigated animals should be encumbered as little as possible by the collars which are adapted in size and weight to the body weight, anatomy, and gaits of the respective animals.

In 1994 work together with Engineering Office Schulte (later company VECTRONIC Aerospace) which makes GPS collars and continuously improves them.  All statements relating to GPS collars are based on instruments from this company.

Development of own investigations:  Our projects in chronological order present a history of the technical development of GPS collars. The prototypes developed in 1994 by Engineering Office Schulte were relatively large, up to 1.8 kg heavy, and constructed in such a way that they stored certain localizations of the animals and subsequently transmitted these via the communication satellite TUBSAT-A (Technical University Berlin Satellite) to the ground station in Berlin.  A relatively great amount of energy was needed for this data communication so that the collars were correspondingly heavy.  The instruments were also protected by a special plastic covering to withstand environmental conditions (Fig. 1 on the right).

Fig. 1: The first GPS collars developed by Engineering R. Schulte in 1994 for monitoring the movements of red deer prior to use (left picture) and after two years in the field (right picture)

The telemetric investigation of red deer begun in the winter of 199/95 were among the first worldwide to be conducted with GPS collars on wild animals. In order to investigate the spatial-temporal behaviour of European wild sheep and reindeeer smaller and lighter instruments had to be developed in the following years. Such an instrument is presented in Fig. 2.  The GPS receiver and the satellite antennae are housed at the top of the collar, the electronics, the batteries, and radio transmitter are at the bottom.  Both casings are connected with a cable running through the collar. This collars are used in 1996-1998 in tracking studies.

The projecting wire is an antenna that can send signals from the radio transmitter as well as position coordinates to the ground station.

The weight of the GPS  collars depends mainly on the number of batteries used  which provide the energy for the localizations.  The depicted instrument weighs 700 g and can record up to 4800 position coordinates for which the rhythm of data collection can be adjusted to the desired time period.

In table 1 a typical data recording of a GP collar is given.

All data are stored permanently in the GPS collars and can be directly  read through an interface from a personal computer.

Data evaluation with a GIS:  The locations of the animals are stored as Cartesian coordinates.  For further evaluation the data are converted to Gauss-Krueger coordinates and transferred as dBase files to a geographical information system.  For the construction of  the GIS  various thematic maps of the investigation areas are  digitalized and overlaid with the position coordinates of the investigated animals. The data is analyzed using the software ArcView (Company ESRI  ) and Animal Movement Analysis ArcView Extension (Alaska Biological Science Center).

This pilot project by Umweltanalysen in 1995 should provide the first test of whether the technically involved telemetry using the Global Positioning System (GPS) is practically applicable to wild animal research (for our purposes the lack of precision in localization of the Argos System was too great).  In addition the localization of one female and two male animals in the Harz were to be ascertained at regular intervals using  GPS collars, and the data transmitted via the experimatal satellilte TUBSAT-A to the ground station in Berlin (Fig. 3).

The TUBSAT-A was constructed by the working group of  Prof. U. Renner at the TU Berlin and measures only 38 x 38 x 38 cm in size with a weight of 35 kg. In 1991 together with the Ariane V44 it was put into orbit and synchronized with the sun. It was under observation from the ground station at the TU Berlin, specifically at the Institute for  Air and Space Flight where the data were also received and transformed. Data transmission occurred at the frequency of 143,075 Mhz.  For one orbit around the earth the TUBSAT-A needs 100 minutes.  In relation to Europe this results in two to three usable overflights, one at noon between 11.00 and 14.00 and one in the evening between 21.00 andmidnight, which successfully transmit data (all data according to RENNER, 1991). 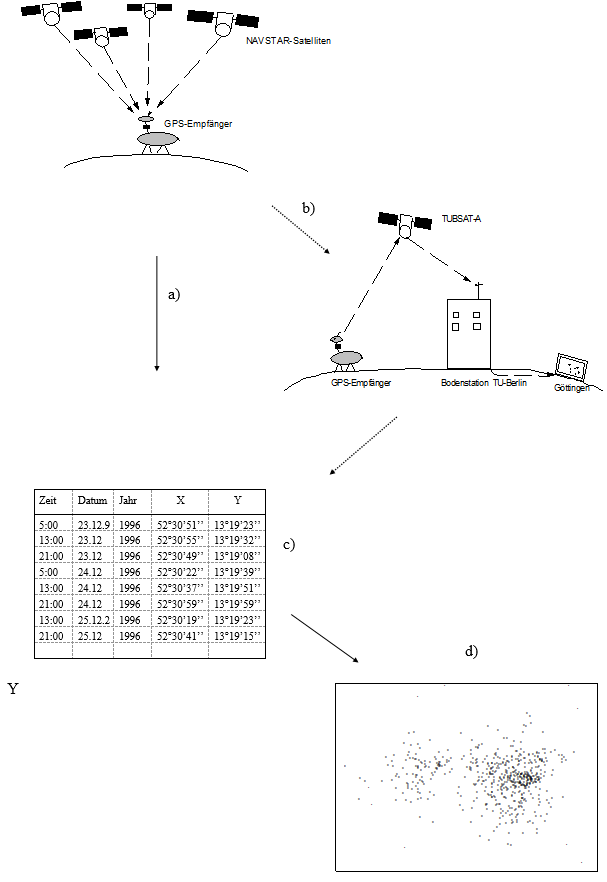 Fig. 3a: Schematic representation of the GPS system, data transmission via TUBSAT-A and data evaluation

This project is a pilot project particularly, because according to our knowledge, it was the first telemetric investigation using GPS on wild animals in Europe. We wanted to know whether  the GPS collars provide usable position coordinates of the red deer studied, even under the difficult conditions found in the Harz, and whether these data could be transferred smoothly via TUBSAT-A to the ground station. The longevity of the batteries as well as the functionability of the GPS  collars also had to be tested.

The study was conducted in the Westharz. During three winter feedings in the evenings in February/March 1995 two adult male red deer (Nr. 1 and Nr. 2) and a two year old female red deer (Nr. 3) were immobilized with a tranquilizing gun using injection projectiles of  the system TELINJECT and provided with GPS collars.

The prior investigations resulted in an average error in localization of  100 m (n =52) using GPS collars.  A total of 373 valid localizations were obtained for the three investigated animals, of which 298 were from animal Nr. 3, a juvenile female red deer (Fig. 4).

Neither of the male red deer roamed very far; Nr. 1 used the area surrounding  the winter feeding area as his home territory from April until June 1995, Nr. 2 the same  area from February until May 1995.  The female red deer Nr. 3 only strayed in the area around its winter feeding place from March 24 until April 23, 1995, and then moved to an area 8 km northwest where it stayed until August.

Telemetry using GPS collars is shown to be an applicable method to investigate the spatial and temporal behaviour of red deer in difficult terrain as the determination of the position coordinates and the transmission of data via TUBSAT-A were successful.  The design and functional life of the GPS collars should be improved for future studies.

The investigations were financed by the forma German Agency for Space Flight (DARA, now DLR)and from hunting research funds of the Ministries of Nutrition, Agriculture, and Forestry of Lower Saxony and Saxony-Anhalt.