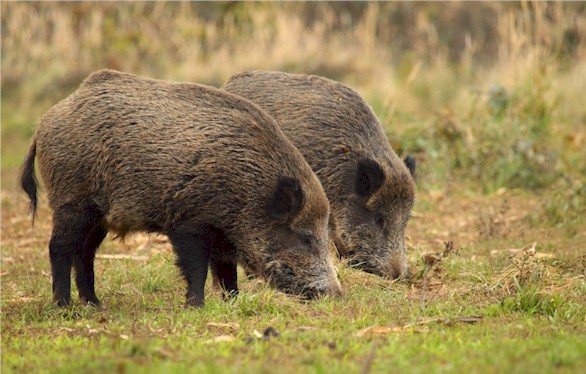 In the months following the deposition of radiocesium from the Chernobyl fallout, levels ranging from a few becquerels of Cesium 137 per kilogram to several thousand becquerels per kilogram were measured in wild boar meat in Germany.
In 2020, the range of Cs 137 contamination in wild boar is still as wide, and maximum levels in some regions are higher today than in 1986.
One phenomenon is of particular importance: the large differences in radiation levels in wild boar occur not only between different regions in Germany, but also in areas more highly contaminated by Chernobyl fallout.
For example, it is also possible to have 2020 samples of wild boar from the same hunting ground simultaneously below 100 Bq Cs 137 per kg but also of several thousand Bq/kg. In addition, large seasonal variations in contamination can also occur in an area.

Up to date overview in Germany

The effects of the Chernobyl accident are limited after more than 30 years in Germany. However, the authorities are still concerned about the radioactivity of wild boars and some species of mushrooms. From a radiobiological point of view, only cesium-137 is relevant today. Foodstuffs from agricultural areas largely exhibit radiocesium activities, which were also measured before the reactor accident. However, due to special transfer processes in forest ecosystems, elevated cesium-137 contamination occurs here in some biomedia.

Deer truffles accumulate the nuclide to a particular degree. And since wild boars are particularly fond of eating these mushrooms, this leads to increased caesium-137 radiation exposure in wild boars. However, since wild boar do not consume deer truffles in equal quantities throughout the year and the truffles also fructify differently depending on the season, the whole thing is very dynamic. Here you can find information and measured values on the Cs 137 contamination of deer truffles.

Sus scrofa (wild boar) is the only animal species that, even 30 years after the Chernobyl fallout, still has significantly increased Cs-137 contamination in some areas of the Federal Republic of Germany. The variability of the Cs-137 measured values both within and between different populations is very large. Deer truffles are the main source of contamination. In this research project, the contamination situation of wild boars is to be evaluated over a period of 3 years using current data from 3 study areas (Bodenmais, Dahn and Zusmarshausen). The project is divided into 3 work packages (WP):

The 3 forestry departments were provided with packaging material for the dispatch of the wild boar muscle flesh samples. The following data were recorded for each wild boar hunted: forest office, hunt date, hunted class, sex, type of hunt and hunt weight [kg]. The thawed muscle meat was homogenized and weighed into 120 ml measuring vessels. The samples were measured on pure germanium detectors. The measurement times were 6 to 24 hours, depending on the activity of the sample.

From September 1st, 2017 to December 31st, 2019, muscle meat samples from 376 wild boars were delivered by the forest services (Bodenmais 129, Dahn 123 and Zusmarshausen 124). So far, 355 samples have been measured for Cs-137 activity. The Cs-137 contamination of wild boars fluctuated seasonally depending on the availability of individual food components within a study area, with the variability of the measured values being up to three orders of magnitude. The values ranged from 0.6 Bq/kg fresh mass (FM) (Dahn) to 16,704 Bq/kg (Bodenmais). The median of the measured values of 2,857 Bq/kg in Bodenmais shows the significantly higher Cs-137 contamination of the wild boar population compared to Dahn with 7.5 Bq/kg and Zusmarshausen with 118 Bq/kg. In the mast years, wild boars were significantly less contaminated than in the years without large amounts of fruits of beech and oak.

Radioactive measurements on meat samples of wild boar from Bavaria are carried out by the Bavarian State Office for the Environment and Food Safety, among others. For 2020, the following results are published on the website of the LfU (Table 1). With regard to the measured Cs 137 activities, it should be noted that it is predominantly meat from animals that have been officially placed on the market. Accordingly, the values are below the 600 Bq limit. In southern Germany, regionally significantly higher caesium contamination levels are measured in wild boar, in some cases up to 10,000 Bq/kg. These animals are not traded, they are disposed of.

Since April 1986 the author has investigated the radioactive contamination of wild animals in various research projects. Unless otherwise indicated, all measurements for radioactivity were carried out in the Laboratory for Radioisotopes at the University of Göttingen. The LARI has a non-nuclide-specific handling permit and can therefore measure radioactive substances within the limit values of activity class SK2.

In the following table measured values of radiocesium activity of wild boars from Germany from 1986 to 1987 are given. The data were collected at the former Institute for Wildlife Biology and Hunting Science at the University of Göttingen. The measurements were made at the former Isotope Laboratory of the University of Göttingen (now the Laboratory for Radioisotopes). Measured values in fresh weight (FW).

The Fukushima Daiichi Nuclear Power Plant (FDNPP) accident in 2011 released large amounts of man-made radioactive substances into the environment. In a study of radiocesium levels in wild boars in Japan, Cui et. al (2020) measured the concentration of Radiocesium (Cs 134 + Cs 137) in 213 muscle samples from wild boar (Sus scrofa) caught in the town of Tomioka, which is 20 km from the FDNPP. The results show that 210 (98.6%) muscle samples still exceed the regulatory Radiocesium limit (100 Bq/kg) for general foods. Radiocesium values (Cs 134 + Cs 137) were between 87.1 and 8,120 Bq/kg fresh mass (FM) with a mean concentration of 450 Bq/kg FM. The distribution of the radiocesium activity is shown in Figure 3.