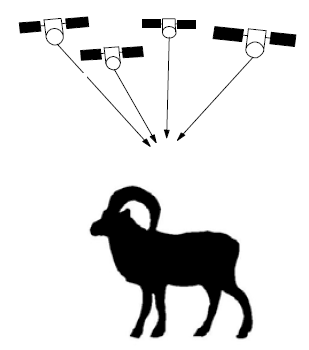 Umweltanalysen has examined the space-time behavior of mouflon (Ovis ammon musimon) with GPS collars in the Harz Mountains and the Thuringian Forest. The projects were sponsored by the former Ministry of Environment, Agriculture and Energy of Saxony-Anhalt and the former Ministry for Agriculture, Nature Protection of Thuringia.

The European wild sheep is the only wild sheep species occurring in the Federal Republic of Germany. It was introduced in 1902 into various regions, for example the Lueneburger Heide and the Harz. The present population is estimated to number ca. 20000 animals, of which 13000 occur in the new federal states. Just like red deer European wild sheep is only managed for hunting in designated areas.
Few investigations on the ranges of European wild sheep have been conducted as yet in the Federal Republic of Germany. A possible reason for this may be the exceptionally shy habits of this species.  Up to the present time the migrations and use of territory of these animals have only been studied within the framework of re-introductions of the species. In these studies the localization of the animals was determined by observations of marked animals (earmarks, collars).

The goal of the presented study was to investigate in regular time intervals over an entire year the spatial and temporal behaviour of European wild sheep in one of the oldest free living populations. From the data obtained the locations and sizes of the ranges were to be calculated, graphically depicted, and the seasonal distribution of the animals in their habitats analyzed. For this purpose 9 wild sheep in the management area East Harz were outfitted with GPS collars.

The GPS collars were programmed to determine the localities of the sheep 2-4 times per day over the course of one year. The investigation area is situated in the eastern Harz in the the vicinity of Harzgerode (red rectangle in Fig. 1):

Fig: 1:  Location of the investigation area in the Harz

The region is hilly, altitudes varying between 320m and 520m above sealevel, with forests mainly composed of closed spruce stands (44%), followed by beech (28%), and oak (11%), which forests are only occassionally interspersed with wet meadows in the valleys.

Animals were caught in two corrals 8 km distant from each other. GPS collars were fitted individually, age and neck circumference documented, and the animals additionally provided with ear marks.

The localization points of the telemetrized animals are presented in the form of an overview map in Fig. 2. The localization points for each animal is a different colour symbol for each.  Since a total of 4509 position points are depicted, the point symbols overlap each other especially in the much frequented areas. Each of the telemetrized animals used only one range throughout the year. One to several day migrations outside of their home ranges occasionally occurred. The greatest distance between two subsequent localizations was 3.8 km for rams as well as for ewes. The greatest range extension of 6.3 km east-west direction was observed for one ewe.

The wild sheep showed different patterns of range utilization.  Fig. 2 clearly shows that the ranges of the wild sheep from the same corral largely overlap.  Each of the telemetrized animals used only one range very intensively throughout the year.  A few sheep went on one to several day migrations. Ram Nr. 63 undertook an especially long journey of 2 weeks directly after being supplied with the GPS collar  in March 2000, before returning to his home range. State and federal roads were regularly crossed by the wild sheep if these were within their ranges as, for example, for Ram Nr. 2.

During the lambing season in April two of the telemetrized ewes moved for 2 weeks to a quiet , remote valley on the eastern border of their ranges. In Fig. 3 all localization points of ewe Nr. 53 are presented (green symbols), whereby all position points during the lambing season  from 8 – 22 April, 2000 are distinguished by red symbols. The reduction of spatial activity to two small areas is clearly evident. The more distant localizations(red symbols)were determineda few days before the ewes gave birth.

All telemetrized wild sheepdid not use their ranges uniformly, definite intensively used areas within these ranges can be clearly recognized. These intensively used areas are home bases to which the animals regularly return with varying priorities. The Kernel Method (Worton 1989) is particularly suited to the presentation andquantitative determination of such activity densities within the ranges. This method mathematically converts the position coordinates into lines or areaswith varying probabilities of use and presents these graphically. For ram Nr. 32 the use intensities in 10% intervals were calculated with the Kernel Method and the respective areas marked with a different colour (Fig.4).

Fig. 4: Utilization intensity of the range of ram Nr. 32

The range was used with varying intensities depending on the season or period of day. Rape and winter wheat fields were only used for grazing from November to March and then only at night. The remaining time of the year the animal stayed in closed forest. The size of the ranges of the investigated wild sheep varied between 549 and 1090 ha.Two of the animals which had originally come from a reserve preferred smaller ranges of 107 ha (ewe) and 412 ha (ram).

For the Thueringer Ministry for Agriculture, Nature Protection, and Environment the question of the spatial needs of this species is important in designating suitable areas for its management.
Goal of this research project was to thoroughly determine for the first time in the Federal Republic of Germany the use of space among European wild sheep using  GPS. The investigation area lies within the game management domain of the State Forest District Leutenberg, at the eastern boundary of the Thueringer Forest (Fig. 1). This is an area of steep slopes within a low mountain range with a predominately spruce forest cover.

For the purpose of this study the European wild sheep were caught in two corrals constructed for this during the winter months of 1996 to 2000 and provided with GPS collars from VECTRONIC Aerospace (Fig. 5). 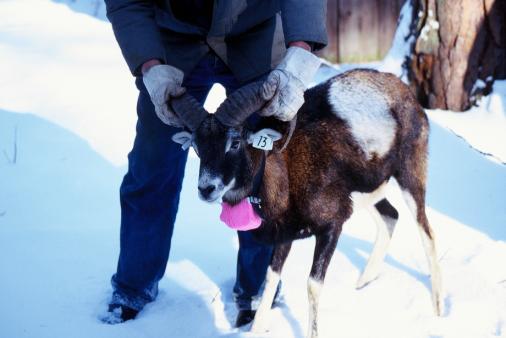 The GPS collars determined the locations of the animals to an average precision of 81 m. Since May, 2000, the precision of the system used has been increased to an average of 15 m. The instruments were programmed in such a way that they could localize the animals and store the position data overa period of one to two years. If during the localization determination signals from 4 satellites could not be received within 5 minutes, no position determination was possible. A total of 8 female and 2 male European wild sheep were telemetrized. The GPS collars were collected by shooting the animals, and the data were evaluated and graphically documented by computer.

In the meantime the GPS collars could be obtained from the 8 female animals studied, and a total of 6087 localizations were made. The functioning period of the instruments varied between 235 and 646 days.

In Fig. 3 the locations of 5 female European wild sheep are depicted. The animals differed in their use of space according to which herd they belonged to. The European wild sheep Nrs. 66 and 67 (brown and green symbols in Fig. 6) were caught in the northern corral, all others in the southern one. Animals Nr. 34 and 35 (yellow and blue symbols in Fig. 6) as well as three other animals belonging to the same herd (not depicted due to lack of space) remained the entire year in the area between the towns of Leutenberg, Herschdorf, and Landsendorf whereby they often crossed roads. One of their main home bases was located only 200m distant from the much travelled federal road B90 south of Leutenberg.

Much larger was the territory of animal Nr. 51 (red symbol in Fig. 6) which belonged to another herd. This animal used practically the same territory as animals Nrs. 34 and 35 plus wandering regularly through a steep valley up a mountain located further to the southeast, where the other sheep were only seldom localized.

Animals Nrs. 66 and 67 had an even greater demand for space, and in contrast to all other animals clearly used parts of their territory only seasonally. Fig. 7, for example, shows the localization points for animal Nr. 67 from the year 1999 in chronological order. In April, May, and June this animal stayed almost excluseively in the northwestern part of its range, while in January all of its localization points were situated directly east of Leutenberg. During the breeding season (1.4 – 27.4) this animal stayed within a very small area (yellow symbol). This restrictive use of range during the breeding season was also observed among other female wild sheep.

The sizes of the home ranges used by the investigated wild sheep varied between 168 ha and 597 ha with an average size of 349 ha (calculated by the convex-polygon method).

The results of the investigation can be summarized as follows: Each of the 8 telemetrized female wild sheep ranged throughout one territory the entire year. Migrations to other areas did not occur. The animals remained in their home territories using this range in the following years. The size of these ranges as well as where they were internally used depended on which herd the animals belonged to.

This research project was supported by funds from the hunting tax of the Thueringer Ministry for Agriculture, Environment, and Nature Protection as well as by own private funds.

This research project was supported by funds from the hunting tax of the Thueringer Ministry for Agriculture, Environment, and Nature Protection as well as by own private funds.