Reindeer have an important economic and cultural position for the people living in northern Finland. In 1997, in a cooperation, reindeer were equipped with GPS collars for the first time in order to precisely track the animals’ movements. The investigations of reindeer (Rangifer tarandus, Fin. Poron) were conducted in cooperation with J. Kumpula of the former Finnish Institute for Wildlife and Fish Research (Kaamanen), A. Colpaert from the Institute of Geography of the University of Oulu, R. Schulte from the Institute for Air and Space Flight of the TU Berlin and Umweltanalysen. The aim of the telemetry study was to determine the habitat use of the reindeer using GPS collar. The transmission of the positions of the animals took place with the micro-satellite TUBSAT of the University of Berlin.

Reindeer husbandry as an important source of life for the Sami

Reindeer have in the past as well as in the present played an important role in the lives of the Samen people living in the north of Finnland.  The reindeer have long since been domesticated, with only few wild ones remaining.  The reindeer graze freely for the entire year, and are normally only herded together during the few days in fall or in spring to brand young animals or for slaughtering. Fig. 1 shows reindeer in the corrals in the investigation area. Here the animals were selected and provided with transmission collars.

Fig. 1:  Reindeer during selection in the corrals, November 1997

During the year the reindeer wander long distances in search of good pasture.  In the summer the animals migrate to windy mountain areas above the treeline to flee biting insects. The population of reindeer in northern Finnland has increased in recent years so that the danger of overgrazing is prevalent. As these northern ecosystems are very sensitive and take a long time to regenerate from adverse changes, a detailed knowledge of the seasonal habitat utilization of the reindeer is imperative.

The telemetry study was carried out in 1997 in Finnish Lapland. The investigations were conducted in a mountainous region, usually above timberline in northwest Finnland in the vicinity of the Norwegian border (Figs. 1 and 2).

Fig. 2:  Location of  the investigation area in Finland  (red symbol)

Goal of study: to determine the seasonal utilzation of pasture

Goal of the presented investigation was to determine the seasonal utilzation of pasture among the reindeer. For this purpose their locations throughout the year were to be determined and monitored with the aid of satellite telemetryand analyzed as part of a geographical information system using Landsat-5 photographs of the vegetation cover. In 1997 for the first time 4 male and 6 female reindeer were outfitted with GPS collars which were to determine their locations 3-8 times per day (Fig. 3).

Three of the GPS collars were constructed in such a way that the position data of these reindeer could be transmitted directly via the experimental satellite TUBSAT-A to the ground station in Berlin  (see Nr. 2 The Beginnings:  Pilot studies of red deer).  The GPS collars were also provided with a radio transmitter so that the animals could be localized in Finnland.

The GPS collars determined 3994 localizations of the reindeer, the functional periodvaried between 22 and 227 days.  Based on the number of possible localizations, the actual rate of localization was 0.79, which was neither dependent on the vegetation cover nor on the season. The male animals mainly migrated in early winter to graze in bare, lichen covered mountain areas with a thin snow blanket. Fig. 4 shows the migrations of two reindeer.

With increasing snow cover in winter the male reindeer decreased their wanderings, concentrating in ever smaller areas. In late winter when the snow cover turned harsh they moved to mountain birch forests where the snow was softer, and browsed lichens and buds from the trees.  In May the animals were frequentlyto be found in heathlands.

The longest migrations took place during the summer months. From August until September  they travelled to various pastures depending upon the available browse supply.

The satellite telemetry proved to be an effective method to monitor the migrations of the reindeer.  However, various technical problems were encountered in the use of the GPS collars:  Though the transmission of position data via TUBSAT-A was successful, the collars having a weight of 1.5 kg. were too heavy.  Also water seeped into some of the instruments which later proved to be due to a non-suitable composition of the casing material.  Finally the shape of the case housing the electronics and batteries was inappropriate and needs to be improved since snow accumulated on some of the cases while the animals were grazing, further increasing the weight of the collars.

These problems were solved in subsequent years, and VECTRONIC-Aerospace designed new GPS collars specially for reindeer, which were tested with good results in actual studies by the Finnish Institute of Wildlife and Fish Research.

A pilot project of reindeer husbandry with GPS-GSM collars

This GPS telemetry study on reindeer was carried out in 2002. Reindeer husbandry in Finland has been introduced by the Saami people. However Finnish people have raised reindeer for at least 250 – 300 year. Presently there are about 5500 reindeer owners, of which 1000 Saami. The total number of reindeer is approximately 200 000 during winter, and 300 000 during summer.

The main goal of the telemetry project is to test if GPS-GSM collars are suitable to deliver “up to date information” about the movement and activity of reindeer. The investigations are part of the (LUIAS) project, which is analysing the interactions between reindeer husbandry and other uses of natural resources. The LUIAS project should result in a theoretical model for a land use interaction analysis system to evaluate and valuate the use of natural resources in respect to reindeer husbandry. Questions are: how select reindeer different kinds of pasture areas? What are the effects of forest handling, roads and settlements on the pasture use of reindeer?

In this pilot project four reindeer of the Oraniemi district have been equiped with GPS-GSM collars (additional 15 reindeer are collared with “normal” GPS collars). The 4 reindeer are carriing a 750 g collar which determines and saves her respective locations via GPS (Global Positioning System). The position data are transmitted directly from the collar by a GSM-modem (Global System for Mobile Communication) via mobile phone to our computer. The collars are programmed to take three fixings per day and sent 7 position data at once, because this way saves money.
Experience the collars will work even with temperatures -55 °C.

Home range utilization of reindeer in summer and winter

The results of their movements are presented in figure 6. The map will be updated every third week. So the reindeer herders will get informations where their reindeer are.
During the first two months after collaring, both female reindeer 211 and 215 moved only few kilometers (fig. 6). Because at the beginning of winter reindeer normaly use a lot of time for grazing, they dig lichens, dwarf shrubs, hays and sedges from the snow.

When pine and spruce forest become logged a lot of arboreal lichens  from the top and branches of felled trees are available for reindeer. But although those loggings give plenty of food for the reindeer all at once, they usually destroy the whole arboreal lichen pasture for a very long time (80-120 years). Nowadays this is probably the most limiting factor of the pasture resources of reindeer herding. 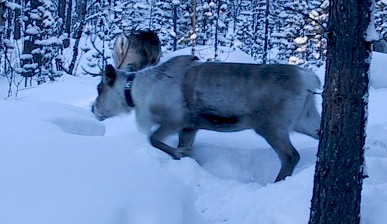 During winter reindeer need energy rich food because they have to locomote and dig in deep snow.
However, reindeer are well adapted to stand even very hard snow conditions if there is enough food available (especially lichens and dwarf shrubs). 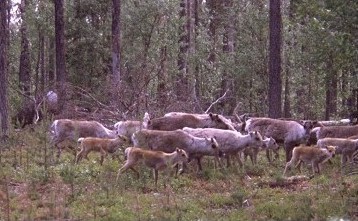 During summer reindeer can form herds, even thousands of heads.
This small summer herd is changing its pasture area to seek fresh green vegetation and hills for protection of the insect harrasment. Open, large and windy mires with plenty of green vegetation are the best summer pasture areas in the Oraniemi district. 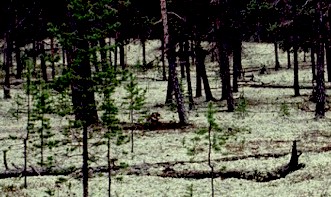 Terrestrial lichens especially all Cladonia-species represent an important source of food for reindeer during the winter. The photo shows a dry pine forest with plenty of lichens. Heavy and long term grazing, trampling of reindeer and also the effects of different land use have made this kind of lichen pastures very scarce in the reindeer management area in Finland.

The effect of heavy grazing and trambling can be seen especially along the left side of the reindeer fence where lichens in the heavily grazed summer range area have nearly totally dissappeared, wheras the right side shows the intact winter range area.

Reindeer herders start to search their herds  in midsummer when the calf marking starts. Usually they first use an aeroplane in order to find  the reindeer herds easier. Now it is also possible to use our “GPS/GSM-reindeer” as a pathfinder of their herds.

More Information about reindeer in Finland

About reindeer herding in Finland